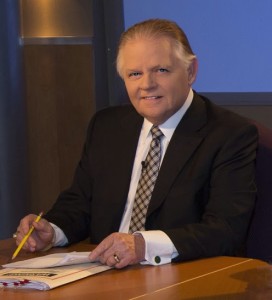 n 2003, James B. Towle founded and hosted American Trigger Sports Radio to share his love of shooting competitions as he traveled across the United States covering and participating in shooting sports events. Trigger Sports Radio ran weekly and Towle interviewed a variety of guests including top guns, NRA spokespersons, manufacturers, authors and sponsors.

Soon, Towle realized that his audience would be better served if they could see the sports-not just hear about them. This is when American Trigger Sports Network (ATSN) was born. In 2008, ATSN.tv became the ONLY web-television network devoted entirely to trigger sports with a worldwide LIVE weekly web television broadcast of “Trigger Sports LIVE!” The format included an NRA update direct from their headquarters presenting 2ndAmendment gun laws and issues, trigger sports news, hunting reports from around the world, regular contributors and special guests discussing current issues, plus professional video productions that transported the audience to major shooting events of all disciplines across the country.

ATSN grew an even larger audience and began nationally broadcasting ATSN TV, dedicated to full competition trigger sporting coverage on Direct TV and Dish Network through the Pursuit Channel. ATSN has become the trigger sports authority and is well-recognized in the industry, among shooters in rifle, pistol, shotgun, 3-gun and archery competitions. ATSN was the first on the shooting sports scene and has original web archives and full event DVD coverage of up-and-coming shooters, top gun pioneers and annual events.

Always on the cutting edge, this visionary, James B. Towle, felt that more and more citizens were involved in self-defense as crime increased. Noticing a growing interest in his training broadcasts, which included trouble-shooting: clearing malfunctions, strong hand-weak hand training, Tueller drill analysis and self-defense responsibilities as an armed citizen, Towle felt the need to properly educate and inform his viewers. As a 2nd Amendment advocate, Towle trained with gun owners while keeping abreast with the news and controversy regarding guns in our country. Determined to help the law-abiding citizens to be properly trained in safety and responsible handling of side arms, the Stop the Threat TV Show began with five episodes − the only series dedicated to teaching the mental preparation and responsibilities of armed carry. Popular demand determined that viewers wanted more Stop the Threat TV as wives, children and families, trained and watched the episodes as a guide to preparing for the unthinkable.

The Stop the Threat TV Show is a round-table discussion with special guest experts in firearms, law enforcement, self-defense, law or other professional fields that can offer insight into crime situations. Each episode features a reenactment of a REAL crime story as it occurred in news headlines across the country. Guest experts offer advice as to where the armed citizen could enhance his or her chances of safety. The Stop The Threat TV Show episodes presents thought provoking episodes challenge the armed citizens with “When to Draw or When to Retreat” decisions that could save lives. Stop the Threat TV has nearly five million annual viewing audience who are committed to the show. The founder, creator and host, James B. Towle, personally answers each email from viewers and signs off every episode with “Be Safe… Be Trained… Be Alert.”