Last year a group of friends and I got together with the idea that we don’t get to shoot often enough during Illinois winters.  Between the snow, ice, cold temperatures and the arctic blasts, none of us really want to go outside to shoot.  But, the nearest indoor range is over an hour away and the nearest range will not let us practice for USPSA…..bullseye only.  After a whole lot of discussion and research, we decided to buy airsoft pistols and try using them to practice.

I’m happy to say that our experiment was successful!  Each one of use got better due in large part to being able to shoot consistently over the course of the winter.  However, like all things, our airsoft project has grown and evolved.

Our first idea of just having fun and practicing for competitive shooting has truly evolved into a full blown bi-weekly crash course of skills for the concealed carry holder.   That, in my opinion, has been the most rewarding part of all of this.  Each one of us carries a handgun and our skill levels range from beginner to “expert” with a wide variety of ages.  When we first started our “season” this year, our youngest was a young lady in her twenties from my hometown who just happens to live down the street from my parents and our oldest is a retiree who lives here in Jerseyville, IL, who watches Stop The Threat.   In between, we have had a core group which includes a retired state trooper, a CCW instructor, a USPSA competitor and a machinist who loves guns.

Since I’m the one who has been kind of pushing the idea, I sank a few hundred bucks into buying some steel targets (including a Texas star) from www.tactrainer.com and some scaled down cardboard USPSA targets from www.targetbarn.com.  Our first night was mainly to introduce people to what we had been doing and the focus was on the skill of target transition.  Let’s face it, a Texas star is challenging no matter what size or where you’re shooting and the El Pres is just loads of fun.  At the end of the night, I asked for some feedback.  Overwhelmingly, the vast majority of the folks who came were interested in developing their gunhandling and  marksmanship skills for concealed carry.  So I asked what they would want to work on and they give me some suggestions.

Now, let me say that it has been a great experience for me as a firearms instructor to do this because I never would have been exposed to so many skill levels and physical abilities at one time.  For every drill I create, I have to consider if it will challenge Gary Bell who is an outstanding shooter while not being too difficult for our less experienced shooters.  Will this be too hard for our retirees physically?  Plus, I have to consider the limitations of airsoft guns and what we have as props.  I’m being forced to think harder and work at this a little more.

One of the least addressed skills in the concealed carry world is shooting with a flashlight.  Not a single one of the concealed carry holders with me had ever done this, nor had my 11 year old nephew who decided to check it out the night we were shooting with the lights off.  Now, before I continue, let me say that my nephew has a strong interest in the shooting sports and he and I have shot airsoft in the backyard on several occasions to teach him about safe gun handling, grip, stance, shooting with both eyes open and how shooting can be fun.  You can probably imagine what the other shooters were thinking when he came with me and said he was going to shoot.  Well, I’m proud to say he did very well.    I brought a variety of “tactical” flashlights I have accumulated over the last twelve years along with some household lights commonly found in homes across America.  After a crash course on how to hold a flashlight and a few drills to introduce the techniques.  The shooters were allowed to choose the light they felt most comfortable with according to what technique they were most comfortable with and then we shut off the lights.  Now, this was a golden opportunity for everyone there because none of the shooters had ever received any instruction on the topic and immediately saw why it was so important.  They all found it challenging, fun, and so unique that some of them turned around and bought some lights at Outrageous Outdoors where we shoot!

Shooting on the move is also something not many indoor ranges allow shooters to work on and also something very few concealed carry instructors are teaching in their basic classes.  Again, the challenges for me as an instructor and as a match/drill designer were numerous because of the variations in skill levels and physical abilities.  But, the night we focused on shooting on the move, every shooter came away saying they felt more comfortable with their abilities and more confident as concealed carry permit holders.   Our drills were quick and short with a USPSA type stage at the end to drive home the techniques.

One of the most rewarding nights was when we decided to focus on shooting around barricades and learning to “pie” a room. One of the ancillary skills that night was shooting with your support hand and so we worked on being able to use either hand to address a corner. And, would you believe my nephew had the fastest time when we shot our USPSA stage at the end of the night?

I know what some of you may be thinking: airsoft guns are just toys. Yes, they are toys. But, it’s a cheap, safe, and fun way to both teach and learn some skills that we may not get the opportunity to work on otherwise. It’s a great way for me to teach my nephew gun safety and introduce him to the shooting sports. It’s a great way to shoot when you don’t have good weather or access to a “real” range. So what excuse can you possibly have to NOT shoot over the winter?  If you have any questions, hit me up on Facebook!

Rich Portwood photos from one of our shoots 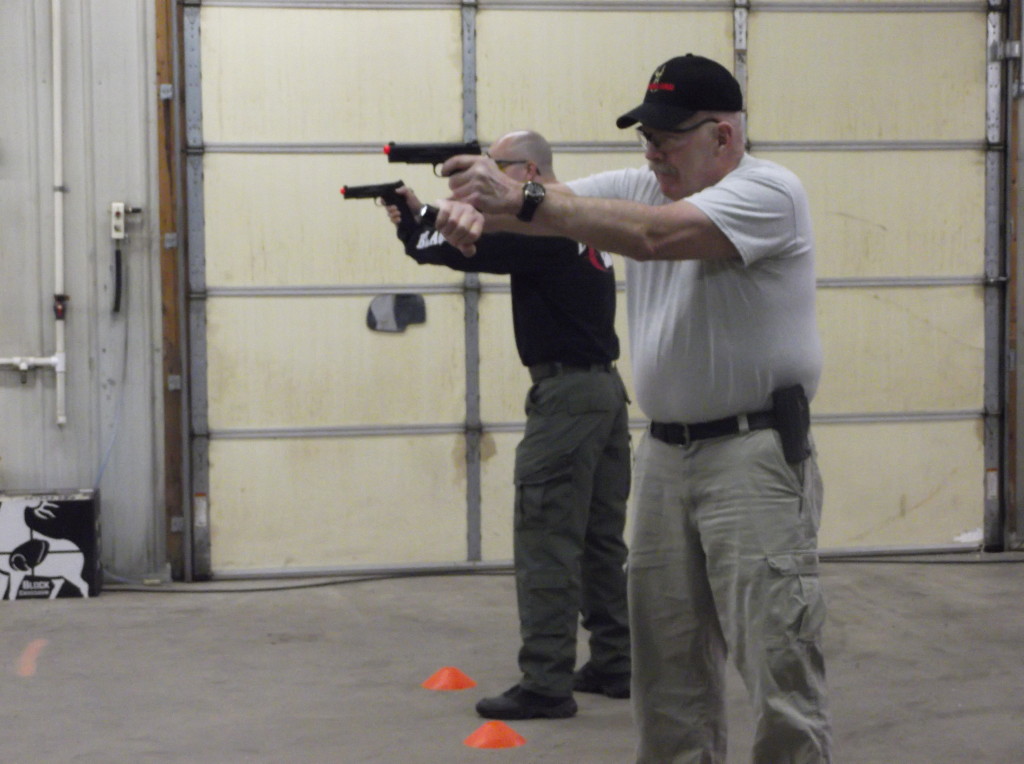